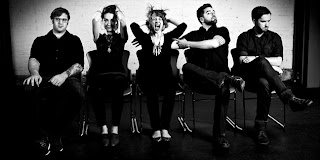 "Turning Violet Violet has graduated from an emerging pop rock outfit into a fixture in the Philadelphia indie music scene. It’s been a busy year for the band. They sharpened their live edge playing with Glasvegas, East Hundred, Oh Land, Mr. Dream, and many others all over the east coast. After spending months writing and recording, TvV is touring throughout 2012 to promote their latest independent release, Double Cure."

Favorite album of all time?
Sarah: This changes a lot for me. The one album I always come back to no matter what is Vladimir Ashkenazy playing Rachmaninoff Concertos with the London Symphony.
Jeff: The Beatles, “Abbey Road”.
Eric: As Cities Burn, “Come Now Sleep”.
Brandon: The Clash, “London Calling”.

First concert attended?
Sarah: DC Talk at Susquehanna Bank Center in 1997.
Jeff: Dave Matthews’ Band, “Crash” tour in 1996.
Eric: MxPx/Ghoti Hook.
Brandon: In Jr. High I played at a battle of the bands at Our Lady Fatima in Hopewell, PA. We covered Rancid's ‘Ruby Soho’. I saw someone throw fire crackers in the mosh pit.  It was a pretty big day for me.

Favorite concert ever?
Sarah: I’m embarrassed to say that it was probably Styx at the Mann Center circa 2007. I wasn't a fan before that show and had to work the concert. Their stage show and overall musicianship was so compelling, it was ridiculous.
Jeff: Sufjan Stevens, “Illinois” tour in 2006.
Eric: The Thrice/Brand New/mewithoutyou tour.
Brandon: It just happened but possibly seeing The Beach Boys during their current 50th Anniversary Tour.

Least favorite concert?
Sarah: Kings of Leon, 2009-ish at the Vet. I don't know what else to say. I was miserable.
Jeff: Aerosmith, “Nine Lives” tour in 1997.
Eric: Dead Poetic concert after their hiatus. Their singer sounded like he didn't hit a single note.
Brandon: Hoobastank at Metropol in Pittsburgh. Not a lot of underage shows back then.

Any thoughts, experiences about Pittsburgh?
Sarah: I love Pittsburgh…partially because Brandon is from there and partially because it's such a great city. There's such a family vibe to the city overall. I love the hills and the diversity AND Pittsburgh has been great to us every time we've played there.
Jeff: The thing I like most about Pittsburgh so far is that it's not flat.
Eric: I love going to Kennywood Park.
Brandon: I'm the only guy in the band from the Pittsburgh area (Ambridge), so I have a ton of thoughts, but will narrow it down to one. Bringing people who have never been to the city through the Fort Pitt Tunnels ranks pretty high. It's the moment where people realize how unique a city Pittsburgh is.

Thanks, guys. With a Pittsburgher amongst your midst, you must be doing something right!
Posted by Hughshows at 7:00 AM