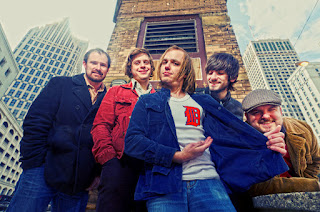 "2012 is shaping up to be The Sights’ best year yet. They’ve already supplied the music for two Chevrolet ads, and this summer will bring a new single (“Eso No Está Bien Pequeña/Like Two Little Kids”) as well as the release of their seventh effort, Left Over Right. On it, Baranek is joined by Jarrod Champion (keyboards/vocals), Dean Tartaglia (saxophone/vocals), Kyle Schanta (bass) and Skip Denomme (drums) where they deliver not only their most soulful album to date, but do it with all of the intensity that has fueled their previous recordings and live shows for well over a decade. If you love – really love – passionate songs that fire your imagination and move your ass, then you’re gonna really love The Sights."

I want to thank the band's frontman, Eddie Baranek, for taking a few minutes to participate in this edition of First/Last.

Your last album bought?
The last album I bought was “The Great Memphis Sound” by The Mar-Keys, the lifeblood of Stax Records.

Favorite album of all time?
Why the newest Sights' record, of course. It's called “Left Over Right” and you can get it from me at the show or online or order it on our website.

First concert attended?
My first concert was The Monkees on accident. I was with my family coming home from a white water rafting adventure in West Virginia and the show was near Three Rivers Stadium at some outdoor venue. I was about 11 years old.

Last concert?
The last concert was the one we did with Tenacious D. In fact, we'll be out all summer supporting them. Great band and sweet dudes.

Favorite concert ever?
I am still in love with the one time I saw Jonathan Fire Eater in Detroit in about 1996. They eventually became The Walkmen.

Least favorite concert?
Anything with a laptop.

Any thoughts, experiences about Pittsburgh?
I love Pittsburgh, it has such a Detroit feel to it. I remember going to Primanti Bros. after a gig and some asshole was yelling at his woman 'cos she wanted fries on the side, not in the sandwich. How can you yell at someone for the way they eat something? Who cares?

Thanks, Eddie.
Posted by Hughshows at 7:00 AM