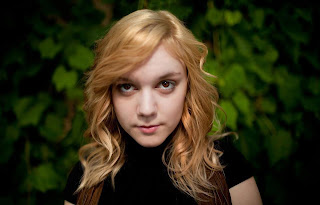 "Blessed with a commanding, blast-it-to-the-back-of-the-room voice, the 21 year-old Lydia Loveless was raised on a family farm in Coshocton, Ohio—a small weird town with nothing to do but make music. With a dad who owned a country music bar, Loveless often woke up with a house full of touring musicians scattered on couches and floors. When she got older, in the time-honored traditions of teenage rebellion, she turned her back on these roots, moved to the city (Columbus OH) and immersed herself in the punk scene, soaking up the musical and attitudinal influences of everyone from Charles Bukowski to Richard Hell to Hank III.
Indestructible Machine, Loveless' Bloodshot debut, combines heady doses of punk rock energy and candor with the country classicism she was raised on and just can't shake; it's an gutsy and unvarnished mash up. "

Lydia brings that 'Indestructible Machine' to Pittsburgh next Tuesday supporting fellow Bloodshot Records label-mate Scott H. Biram. My thanks to Lydia for taking some time to participate in this edition of First/Last. 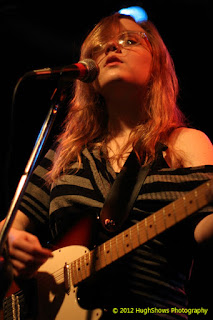 The first album you ever bought?
“Gorillaz” by Gorillaz.

Favorite album of all time?
Dang, that's tough. “Transformer” by Lou Reed off the top of my head.

Least favorite/most disappointing album?
My husband has a Fiery Furnaces album that makes me want to kill.

Favorite concert ever?
Andrew WK, Fucked Up and GWAR at SXSW 2010, Arcade Fire in Columbus, 2008.

Any thoughts, experiences about Pittsburgh?
I have only been there once, I think, to see Bob Dylan. It was good times, obviously!

Posted by Hughshows at 7:00 AM