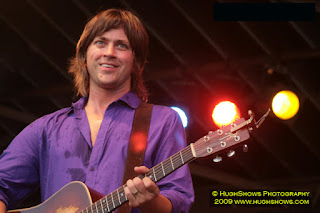 "Rhett Miller is the front man and main songwriter of the hard-charging rock ‘n’ roll quartet the Old 97’s, as well as an accomplished solo artist. In addition to his nine studio albums with the 97’s (most recently The Grand Theatre Volume One and The Grand Theatre Vol. 2 in 2011), he has released four solo albums; 1989’s Mythologies, 2002’s The Instigator, 2006’s The Believer, and 2009’s Rhett Miller. Miller is set to release his first live covers album, The Interpreter Live at Largo, on November 22, 2011 on his own recently established label Maximum Sunshine Records."

As previously mentioned, I am a huge fan of Rhett and his music. His new solo album "The Dreamer" is being released tomorrow and I want to thank him for taking a few minutes to participate in this edition of First/Last.


The first album you ever bought?
ZZ Top's “Deguello”. Bought with my saved-up allowance at a grocery store.

Favorite album of all time?
“Hunky Dory” by David Bowie.

Least favorite concert?
I kind of like them all. As Woody Allen's character in the film Manhattan said about orgasms, "My worst one was right on the money."

Thanks, Rhett. Looking forward to the gig this week.
Posted by Hughshows at 7:00 AM