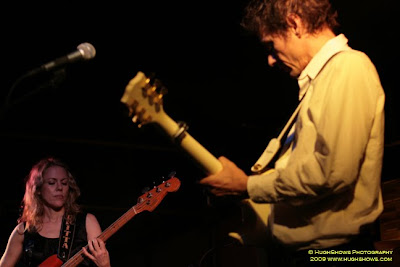 The band is playing a special show tonight in Oakland. The set consists entirely of songs from Dean's former group, Galaxie 500. So that means probably no Tiger Lily...sniff. Opening the night are local favs Meeting Of Important People doing a rare all acoustic set. Seriously, this is the year's first not miss show. Dean & Britta released one of my favorite albums of last year and were kind enough to participate in this special 'preview' edition of First/Last.


The first album you ever bought?
Britta: “Frampton Comes Alive”.


Favorite album of all time?
Britta: Too difficult to choose, but off the top of my head, "Love and Other Crimes" by Lee Hazlewood, "Loaded" by The Velvet Underground".


Least favorite/most disappointing album?
Britta: I can't answer either of those questions. There are so many disappointing and "worst" albums, I think I just automatically block them out.


Any thoughts, experiences about Pittsburgh?
We love Pittsburgh!


Thanks to both of you. Take my word for it, Pittsburgh loves you guys back. I am really looking forward to this show tonight.