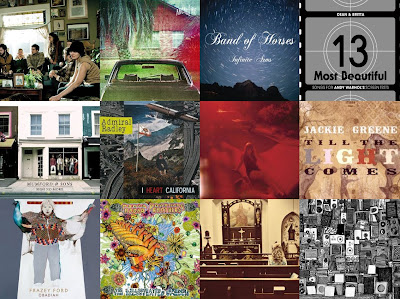 Even though I was fortunate enough over the last week or so to give you some examples of my favorite albums I heard this year through the voices of the artists themselves, there are are few more releases that deserve attention. Just one blogger's opinion, mind you. Whether I mean to call it a top ten or not, I listened to these albums a bunch, and absolutely loved them.

Dark Dark Dark-Bright Bright Bright
Maybe I have expressed this here before, maybe not. The truth is, I have never listened to anything more in my life than this simple, stark EP, which was released in the spring before their full length, Wild Go, in the fall. It was/is absolutely inconceivable how many times I would enjoy this. I was obsessed in playing it on repeat for about two weeks till I got sick with myself for still wanting to hear it. Crazy is that still to this day I can put it on and still enjoy it more than any other album this year or next. How can you adequately describe something like that?

Arcade Fire-Suburbs
I never hated this band at all. I just never 'got' them. They were bombastic, too intelligent, maybe a little full of themselves for me to appreciate what they were doing. It's funny because I think those are the reasons I love this album. I mean it, I LOVE this album. From the very first time I heard it, I was hooked. People complain that it may be too long. Maybe...what song would you cut? I think it's perfect. All the praise and press and adulation is well deserved to me. Where Radiohead leaves off Arcade Fire takes that baton.

Band of Horses-Infinite Arms
I felt weird liking their debut. Was I jumping on the bandwagon with no regard to my own opinion? Their second album came along and was O.K. but didn't bowl me over in the least. Then this came out in May and I was so ready to dismiss it in a blink of an eye but could not believe how it grew on me. That's the key with this album, it's a total sleeper and when you listen to it for the second/third time, it's astonishing how amazing it is. I didn't/haven't stop listening to this for a long time.

Dean & Britta-13 Most Beautiful
How they took a rather dumb concept (single shot Andy Warhol portrait films) and made an accessible, and ultimately listenable album is remarkable to me. I can play this any time and don't need the movies to do so. Dean Wareham is the man.

Mumford & Sons-Sigh No More
I don't think I heard more negative backlash this year towards any other band than these guys because...why? I really don't get it. Please explain it to me so I can understand. This album is fresh, spirited, and the songs are great. Stop the hate till there's a real reason. For now, this debut is proof that the future is something to look forward to with these dudes.

Admiral Radley-I Heart California
I LOVED Grandaddy. I LOVE Earlimart. They get together and offer up an album of collaborations that is as beautiful as either band can produce. I HEART AdRad!

Jenny & Johnny-Are We Having Fun Yet?
One of my favorite unsung albums of all time is Johnathan Rice's Further North. He teams up with his girlfriend who happens to be one of my favorite solo singers of the last few years. This album is just so damn good. You probably aren't that familiar with it? Your loss.

Jackie Greene-Till The Light Comes
Why I didn't see Jackie open for Gov't Mule at the Trib Total Amp is THE regret I have this year!

Frazey Ford-Obadiah
This is the most ethereally beautiful album released this year. Her voice is amazing. Her songs are worthy of such a voice. Incredible.

Radar Brothers-The Illustrated Garden
They have six albums. They are one of my top five favorite artists of all time. I met Jim Putnam this year! This album is awesome.

The Mynabirds-What We Lose In The Fire We Gain In The Flood
What a beautiful album. Expect to hear more from my girl Laura on this very blog in the new year!

Nada Surf-If I Had A Hi-Fi
A covers album? I didn't think so either but what they pulled off is just a taste of what's coming from this amazing band. Trust me.

Posted by Hughshows at 7:10 PM