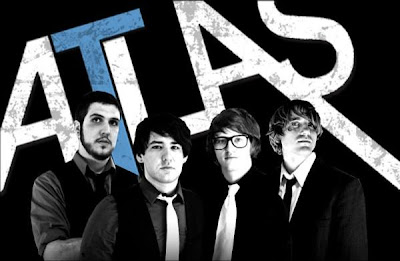 Jon plays keyboards in The Chad Sipes Stereo. He has another band in Pittsburgh called ATLAS and he just sent me a tune called 'At The Water's Edge' from their debut EP, which arrives in October. Along with his buddy and fellow band member Mike, they were cool enough to participate in this, the finale of our week-long extravaganza known as First/Last.


The first album you ever bought?
Jon: Don Henley's "The End of the Innocence". My aunt turned me on to The Eagles when I was a young kid and my mom wouldn't let me buy a Gun's and Roses album so this was the next best thing.
Mike: System of a Down's Toxicity. I was eleven, and I don't think that at that time I realized music could be "different".

Your last album bought?
Jon: I bought a CD from a new local band Paul and Athena. I also recently bought She and Him's Volume 2. I love everything M. Ward does.
Mike: MUSE's "Resistance". Muse is one of my biggest influences. Perhaps this album didn't deliver on all fronts, but still a fantastic effort, as always.

Favorite album of all time?
Jon: OK Computer.
Mike: Hail to the Thief.

Least favorite/most disappointing album?
Jon: I really tried to get into Ben Kweller's latest album Changing Horses, I'm a big fan of B.K. I guess I
was just let down by this one.
Mike: In recent memory? Probably the Yeah Yeah Yeahs' "It's Blitz". I guess it just felt like a big shot in the dark to me.

First concert attended?
Jon: There was this bagel shop that use to host music, the bands were Focal Point, Pensive, and Seasons in the Field.
Mike: I think I was 12 or 13, Reel Big Fish with The Tossers at Club Zoo.

Favorite concert ever?
Jon: At the Drive-in and The Rhythm of Black Lines - Club Laga August 2000.
Mike: The Locust and Daughters at Club Stratus.

Least favorite concert?
Jon: The Hymns at The Red and The Black.
Mike: Any and every of The Bands ever.

Favorite thoughts, experiences about ?
Jon: Pizza Sola is the saving grace of the city.
Mike: Too many.


Thanks guys. I see we have a couple of Radiohead fans in the band. Nice. Let me know when the EP drops.

Posted by Hughshows at 3:57 PM