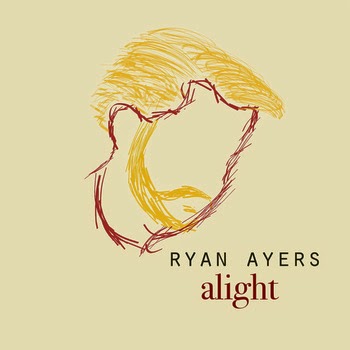 "Ryan Ayers is a solo guitarist mixing together classical technique with accessible songs forms and structures. His stage show is a well crafted blend of engaging music and interesting stories which have captivated audiences on both coasts.
Ryan began playing guitar at the age of thirteen. He attended Loyola Marymount University and graduated with degrees in classical guitar performance and recording arts. It was there that he began his studies with classical guitarist Martha Masters."

Ryan Ayers stops in Pittsburgh Thursday night at Acoustic Music Works in Squirrel Hill, touring behind his latest album, "alight". I want to thank him for taking the time to participate in this edition of First/Last.

The first album you ever bought?
When I was 9 years old I picked up Amy Grant's "Heart in Motion" on tape. My mom had taken me along on a trip to Tower Records so she could grab some new albums to use in the aerobics classes she taught. She grabbed a copy of "Heart in Motion" on vinyl, and I don't know if it was the pop pull of ‘Baby, Baby’ or the allure of the album art, with its strange typesetting of letters going this way and that and young Ms. Grant sporting a crushed velvet dress, but I decided I needed my OWN copy... on tape! I'm sure my mom tried to convince me that she could just dub me a copy of it when we got home, but I wouldn't hear of it and that tape did indeed become the first album I ever bought. Oh, to be 9 again!


Your last album bought?
"Our Love" by Caribou. Dan Snaith's work is just so solid and tasty! "Swim" has been consistently in my listening rotation and now "Our Love" will be joining it.


Favorite album of all time?
Joanna Newsom "Have One On Me" - This album satisfies all of my cravings for art and music; from short, gorgeously simple songs to long, expansive epics. It has classical, folk, world, and pop elements. Fantastic arranging and instrumentation. Well placed, pierce-you-in-the-soul words as well big, fancy, "I-need-to-look-that-up" words. I love that it's a triple vinyl album. And of course, that little squeak in Joanna's voice that pops up every now and again just kills me.


Least favorite/most disappointing album?
Sufjan Stevens "Age of Adz" - I had heard the early rumblings about how the album was going to be so different, completely unique, and mind blowing and so I was excited to see what he had come up with. It is definitely different and completely unique but it didn't resonated with me (and still hasn't, since I once a year I give it another go). I love that he took it where he wanted, I was just disappointed in myself for not being able to follow along. One day I'll get it.


First concert attended?
I was thirteen for my first concert. My family had a tradition of making a grand gesture for the 13th birthday. My siblings, who are much smarter than I am, took full advantage of the situation and planned big trips, heading for places like Disneyland and Disney World. I decided that I needed tickets the Janet Jackson "If" tour that was happening right in our backyard. And to make it more "unique," I decided not to invite either of my folks, instead opting for inviting the only other adult I had a good rapport with, my tennis coach. I was able to convince him to let me buy a shirt at the concert with the racy "If" album cover on it. Not sure my parents would've gone for that!


Last concert?
I took my wife to see her current favorite artist, Jason Derulo, at the LA County Fair. I was looking forward to seeing what sort of eclectic band he'd put together to handle all of those crazy hooks of his, hoping for, at least, a sax player busting out some phrygian modes. But alas, he was backed by a single DJ handling all the music and 6 backup dancers.


Favorite concert ever?
Tortoise at The Troubadour c.2008. One of my favorite bands and oh how they deliver for live shows! There's something so cool about having two drummers set up front and center on stage, facing each other and looking like they're about to do battle, with all the other instruments flanking them.


Least favorite concert?
Ratatat at The Troubadour. Let me cover myself by saying first that I love Ratatat! They are one of my favorite bands. Such killer layers, grooves, and production! I was so excited to see how they were going to pull of their sound live. But when I saw them they had only one additional musician accompanying the two band members. Which meant that they used a lot pre-recorded tracks to fill out the sound of the show which sucked most of the energy right out of the venue.

Any thoughts, experiences about Pittsburgh?
This will be my first trip out to Pittsburgh! I can't wait to check out the city!

Thanks, Ryan. Speaking of 'I-need-to-look-that-up' words... phrygian modes? Nice!
Posted by Hughshows at 5:32 AM