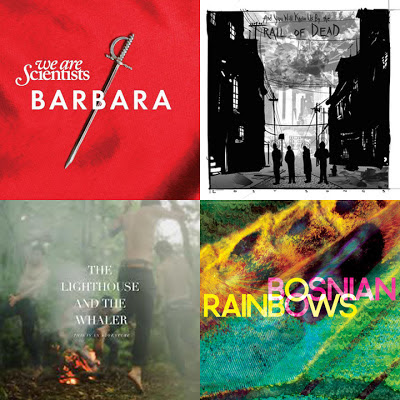 "I've seen Low a number of times, so I anticipated a killer show, but didn't necessarily expect anything particularly new. In the end they surpassed my expectations on all levels. One of the strongest shows I've seen so far this year." - Daniel B.

"I had the great pleasure to witness Mike Doughty rock his 16-song setlist in front of a very appreciative crowd at the Altar Bar. A fantastic night of top-shelf music courtesy of HughShows ticket giveaway." - Marie P.
Thanks to everyone who entered last week and we continue today with the giveaways courtesy of the always awesome folks at Drusky Entertainment.
All you have to do is email me at hughshows@comcast.net with the name of the performer you are interested in seeing in the subject line and the name of the person who will bring I.D. to will call the night of the show, good for two tickets. This contest runs until Friday (7/5) afternoon when the winners will be randomly drawn and contacted. As always, thanks for participating and good luck!
Enter for any or all of these shows this week:

Labels: ...And You Will Know Us By The Trail Of The Dead, Bosnian Rainbows, The Lighthouse and the Whaler, ticket giveaway, We Are Scientists 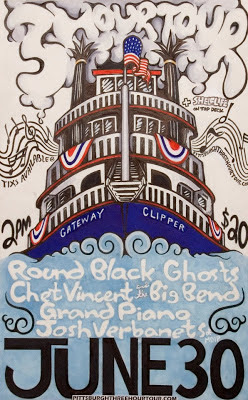 "The term "Round Black Ghosts" is a quoted reference to the pre-Depression 78 records. Rediscovered in 1950's, they started a musical revolution that influenced everything we can call "Rock n' Roll" today. The music out of this period was pure; without artifice. This notion is what Round Black Ghosts, the band, is focused on. Playing in the Pittsburgh/ North East music scene for the past decade, in various bands, we have come to the realization that music is part of our lives. We must always be in the process of writing, recording and delivering our product to an audience. Our sound is a meld of Alternative, Indie, and Rock influences, yet manages a unique quality. Our live shows possess a high level of energy to compliment the dynamics of the songs. Most importantly we have fun doing it."

Check out the band on Facebook, BandCamp and MySpace. I love this band! They are hosting a "Three Hour Tour" this Sunday with good friends of the blog Chet Vincent & The Big Bend, Grand Piano, Josh Verbanets and Shelf Life String Band along for the ride. Talk about fun! I want to thank my man songwriter Aaron Shafer (Guitars/Vocals) for taking the time to participate in this edition of First/Last. 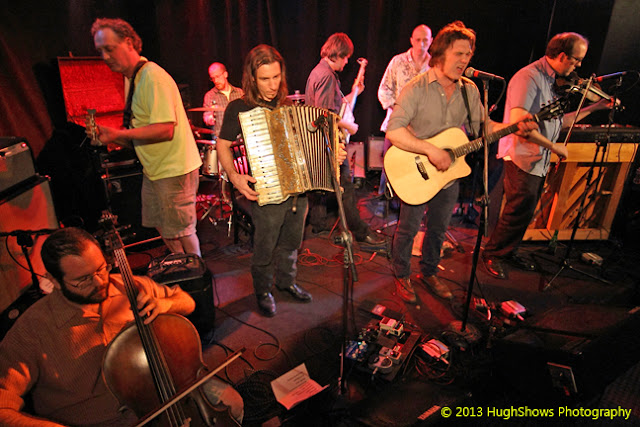 The first album you ever bought?
“Led Zeppelin IV”.


Your last album bought?
The Avett Brothers, “The Carpenter”.


Favorite album of all time?
Radiohead, “The Bends”.


Favorite concert ever?
Tome Petty and CSN at Darien Lake in 2010.

Favorite thoughts, experiences about Pittsburgh?
I love how you can walk or ride a bike to any part of the city, day or night.

Thanks, Aaron. I am sooo looking forward to this trip, man. What a fantastic line-up!
Posted by Hughshows at 7:30 AM No comments: 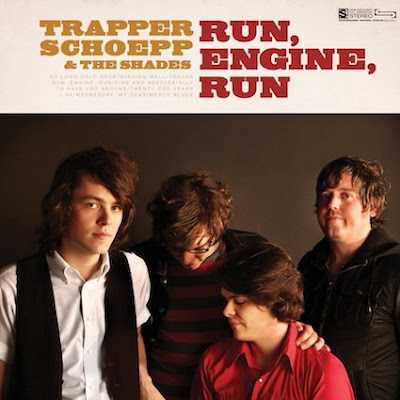 "Trapper Schoepp has the ear of a troubadour, the eye of a journalist and the heart of a young poet. He began writing songs at a tender age with startling facility, distilling rock, folk and country traditions into tunes that are at turns spirited and melancholy. Themes ranging from pride of place, love and adventure shine with surprisingly sophisticated metaphors for a songwriter so young. Run, Engine, Run won’t be out of place filed next to other artists distinguished for their early talent like Justin Townes Earle, Ha Ha Tonka and Lucero. Trapper, his brother Tanner, and the rest of their band the Shades offer this album as a love letter to their beloved home state of Wisconsin, and SideOneDummy will release it internationally on September 25, 2012.  Like his namesake M*A*S*H surgeon Trapper John, the 22-year-old Wisconsin songwriter found himself prepping for surgery a month before recording his band’s third and latest album, Run, Engine, Run, the result of a gnarly BMX bike crash 6 years earlier. Fortunately, his mother gave him a guitar after the accident and Trapper was able to turn his experiences on the operating table at the MayoClinic (for spinal decompression surgery) into songs like the Stones-flavored rocker, “Pins and Needles.”

Check out the band at their official Website, Facebook, MySpace and Twitter. The band is touring behind their debut album, "Run, Engine, Run", and stop in Pittsburgh this Saturday at Altar Bar supporting The Wallflowers. I want to thank Trapper (Guitar/Vocals) for taking the time to participate in this edition of First/Last.


Your last album bought?
Our drummer, Jonny, just got me the “Sports” LP by Huey Lewis & The News for my graduation gift. I know I didn’t buy it, but rules are worth bending for my man Huey.


Favorite album of all time?
That always changes, but today it's “Born to Run” by Bruce Springsteen.


Least favorite/most disappointing album?
Whatever is on Top 40 radio when I'm scanning stations is a letdown.


Last concert?
Frank Turner at Turner Hall Ballroom in Milwaukee. The venue is an old burnt-out, German dance hall. They have nets on the ceiling in case any debris from the ceiling fall through. It makes for a gorgeous and haunting concert experience.


Favorite concert ever?
I’ll go with our own shows for the next two questions. We played First Avenue with The Wallflowers this fall. That has to be my favorite rock club ever.


Least favorite concert?
We just drove to Gulfport, MS to play a festival with The Smashing Pumpkins. It stormed, the stage sunk, and we got cancelled. I fed pelicans pizza instead of playing.

Any thoughts, experiences about Pittsburgh?
It's third and 3. What do you do? Give it to the Bus!

Thanks, Trapper. The rules are ALWAYS worth bending for when speaking of Huey Lewis!
Posted by Hughshows at 7:30 AM No comments: 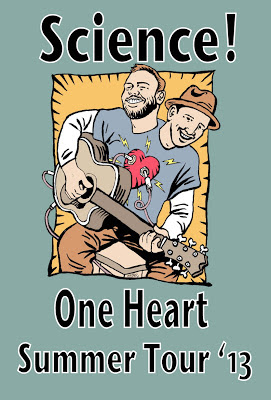 "Science! is a musical pursuit of empirical evidence, using poetry and soundscapes to express the truth of daily life. Science! is something for the everyman to believe in. Their  self-titled EP speaks to the challenges of existence with a rip-roaring exclamation that every ounce of humanity matters, and no voice should go ignored. It’s political; it’s daring and dreamy; it’s the place where rock and folk meet to dance, smile and raise a frothy brew in celebration. Science! is comprised of guitarist and vocalist Justin Stang and multi-instrumentalist Jim Elenteny. For a stripped down two guitar, two mic set, the duo offers a full sound sure to turn any unfamiliar listener into a fist-shaking enthusiast. Stang and Elenteny share a bond stemming from childhood in Sayville, New York, and now thanks to a little fate and a change of residence, the two have reunited some 3,000 miles from their roots. The resulting chemistry of such a time-tested friendship pours from the stage and speakers of each Science! show."

Check the band out at their official Website, Facebook, Twitter, BandCamp and MySpace. The Seattle duo make their way to The Center of Harmony this Saturday and the band is giving away a free CD with every ticket. I want to thank both Jim Elenteny (Multi-Instrumentalist) and Justin Stang (Guitars/Vocals) for taking the time to participate in this edition of First/Last.


Least favorite/most disappointing album?
Lots of difficulty with this one! The debate is currently raging! Justin maintains its Matisyahu's “Youth”, although Jim has never heard it...

Any thoughts, experiences about Pittsburgh?
We've not yet had a chance to perform in Pittsburgh and can't wait to get there and get rocking- from all that we've heard, it sounds terrific!

Thanks, guys. Man do you have a BIG sound from just two guys!
Posted by Hughshows at 7:30 AM No comments: 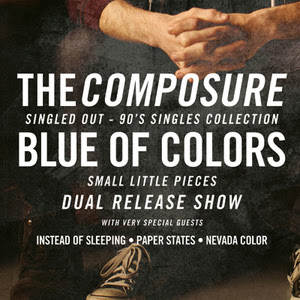 "The intersection of persistence, perseverance and pure talent is only the starting point for bands emerging in the digital age. For THE COMPOSURE, this mix has fueled a nonstop thrust of power-pop energy from Pittsburgh to the world; a journey that continues for the band on March 13, 2012 with the release of their aptly named EP: STAY THE COURSE.  Assembled in 2007 by singer/guitarist Paul Menotiades and drummer Cory Muro, THE COMPOSURE has taken a simple foundation of sweet pop-punk, and built layers of infectious rhythm soaked in Menotiades’ sugary melody. Rounded out with slick harmonies from guitarist Seth Milly and the snapping pulse of bassist Johnny Grushecky, the band’s signature blend feels comfortably familiar yet refreshingly new."

Check out the band at their official Website, Facebook, Twitter and YouTube. They have a new 6-song release called "Singled Out" which had the band covering '90's alternative tunes by such bands as Goo-Goo Dolls, Blind Melon and Sublime. They are having a 'dual release show' this Friday at Altar Bar with friends Blue of Colors. I want to thank Paul Menotiades (Guitar/Vocals) for taking a few to participate in this edition of First/Last.


Your last album bought?
I found the “Chixdiggit!” album at The Exchange for $2.50, what a steal!


Favorite album of all time?
Oh, man…what a tough question. Probably “So Long, Thanks for All the Shoes” by NOFX or “Punk in Drublic”.


Least favorite/most disappointing album?
I always loved Homegrown, but the last EP that they released was a disappointment. I think it was a pretty bad recording and too much of a departure from what they've been. It seemed like they were trying to play off of the fad of that time in terms of lyrics.


First concert attended?
My brother took me to see Phish when I was 10, which is ridiculous, but it was awesome. I'm pretty sure the next show I went to after that was The Queers.


Favorite concert ever?
One of the late 90's Warped Tours, if that counts.


Least favorite concert?
I don't know about worst, but one of the most boring shows I've ever been to was a Copeland show a few years ago.


Favorite thoughts, experiences about Pittsburgh?
Pittsburgh is an amazing city if you know where you're going and how to get there in all senses of the phrase. Of course, there are good and bad things about every city but I am proud to call Pittsburgh home.

Thanks, Paul. Ten years old at a Phish gig? I am sure you were all, "What's that smell?"
Posted by Hughshows at 7:30 AM No comments: