Image of the Day-"Constructive Summer" 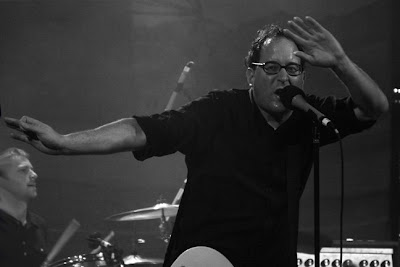 
Knowing full well that the venue might enforce a strict stay in your seat policy (which they did), I opted to snag an aisle seat as opposed to one closer inside the row. If there was a plea from the bands to ignore such an idiotic rule and there was a stage rush, I could have quicker access for good shots. As I spent the first few songs in my Row J seat, I realized that the images I was getting were kinda weak. Thankfully I threw all abandon out the window and just confidently marched down the opposite aisle where I enjoyed the rest of the show hugging the stage where not one person bothered me.

Posted by Hughshows at 4:12 PM No comments:

Image of the Day-"Zip City" 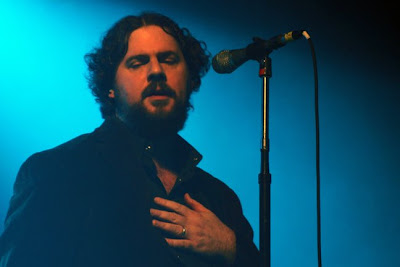 
It secretly astounds me how popular Drive By Truckers have become. Since I first saw them play to a moderately sized crowd @ Club Cafe at the start of the decade, they have gradually expanded their fanbase year after year. They play good ole boy southern rock that, although I enjoy it (particularly in a live setting), they hardly ever diverge from their bread and butter sound from album to subsequent album. One trick pony? I wouldn't go that far but I still don't ever hear them on the radio, ANY radio (yeah, YEP plays them...at 2a.m....or if they are pimping the show with a studio session). My only explanation is that they are a touring monster. Playing more months out of the year than not which only helps people to discover them. A very key aspect of that tour ethic is embracing (early on) the festival circuit. Dirty smelly faux hippies have a ton of expendable income and since The Grateful Dead (when I mention them I refer to Jerry Dead) and Phish are no longer around, someone has to try to wrestle the mantle from The Dave Matthews Band. Patterson and Mike are trying their damnedest to one up Jim James in that department. I didn't even touch upon the brilliant idea of a rotating double-bill with the most popular indie bar band in the country. Whatever they are doing, I believe they will keep on repeating it for years to come.

Posted by Hughshows at 7:17 PM No comments: 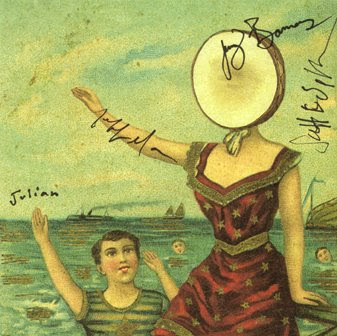 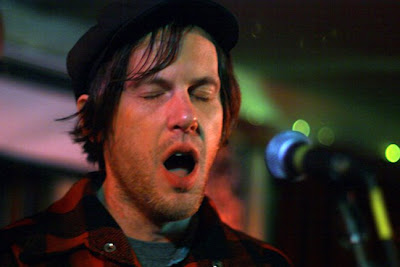 This will be the last Elephant 6 post for awhile, I promise (I do have a lot of flash pics from the stage chaos that was 'The Pressure' though, maybe later). It's just that I went on a whim and came away with one of the most joyous, unique, and unexpected concerts experiences I've ever had. To readers of this blog it's no secret that I go to many, many shows throughout the year. The majority of them I choose carefully with my budget and familial responsibilities and all. Some of them I go not knowing much from the bands in the slightest (Margot & The Nuclear So & So's, The Izzy's, Wax Fang anybody?). THE main reason I go to concerts is to walk away a different person, no matter how minute or profound the change in me is. I want to appreciate, explore, remember, cherish, learn, discover..hell, even hate something from the time and effort I put into going to see someone else perform.
When this tour was announced I wasn't expecting to go at all. Jeff Mangum showed up a week earlier in New York to sing a few bars of background vocals. Cool, maybe I should check this show out? Luckily, I snagged a ticket on a Thursday night before they eventually sold out Friday. The night of the show I knew it was going to be a long night and arrived uncharacteristically a half hour past scheduled doors. As I was walking to the club I noticed several people still mingling outside. I then immediately noticed a tall guy turning the adjacent corner towards the door with a red and black plaid jacket. I recognized the same coat from this dude's pics. Mangum was here. As he walked through the Brillobox doors, up the steps and into the soundcheck I was right behind him. Now, as it seems to happen almost all the time, people (read: someone associated with the venue) think I am with the band. Is it the long hair? I don't know but more times than not I have hung around a show not being bothered by anybody with the impression that I just loaded in the equipment. My mistake this night was ordering a beer. "Bars not open sir, and by the way, who the hell are you and how did you get up here?" I was pleasantly escorted downstairs (kudos to the Brillobox staff who couldn't have been more cool, aftershow especially) and so I dutifully waited for doors in the hallway to be the first person in while several groups of people were turned away looking for tickets. I felt bad for them but as I learned later some people just waited awhile and walked right in with no ticket in hand at all. The movie, performance, filmstrip, performance was a marathon, kick-ass, organic, great, great concert. Just cool as hell. Finally, as I was right next to the stage/'green room' door I noticed Mangum holding a guitar going to center stage. Wow!?! I am no rabid NMH worshiping fan but this is quite something! At the the last minute he seems to decide to head into the crowd and asks for a chair. Now, there's been a lot of talk on message boards about how Pittsburgh sucks because you have this legendary recluse, who never performs, playing an acoustic tune with no mic and people are talking and bottles are dumping and all this peripheral noise. The excuses I heard are valid. It's a bar on a Saturday night at 1:30 a.m. Add the fact that this was totally unexpected. Also take note that he practically brushed against me as he was making his way into the crowd and I hardly noticed what he was doing let alone the people in the back of the overly crowded room. I was there and I don't blame the crowd one bit. So he (along with Julian on saw, how phenomenal ?) plays Engine, which I kind of recognize. I do notice that head Elf Andrew was absolutely glued the performance. Three minutes later it was over. Not overstating the obvious but those three minutes were very special. Special to me, special to the majority of the crowd who were there, and special to those countless fans who were wishing, wondering, hoping, and even doubting that Jeff Mangum would play a song he wrote in public ever again.
After the show, I, along with a dozen or so other people including the dozen or so band members who played on stage throughout the night were mingling around when Jeff came down and cautiously signed some stuff I brought. He was totally cool with me approaching him and asking some general questions like, "How did you fell playing in front of an audience?" It felt nice. "Did you guys plan on playing when the tour was being organized?" No, I didn't know I would be here less than a few days ago." "Will you play some more on any of the other dates?" "I don't know, we'll see." My response was a casual, "Cool beans." He seemed to somewhat get a kick out of that and politely shook my hand. Thanks Jeff.
The aftermath of this show has been minor in the overall relevance scheme of things. My kick-ass pictures were featured on Pitchfork, a site I visit daily. I have read and thoroughly enjoyed Kim Coopers account of the recording of 'In The Aeroplane Under The Sea'. NPR had the show from Chicago to download. Most importantly, I have kept the memory of this show with me for several weeks. Yeah, I have changed, not much but still, isn't that what it's all about? It is to me at least. 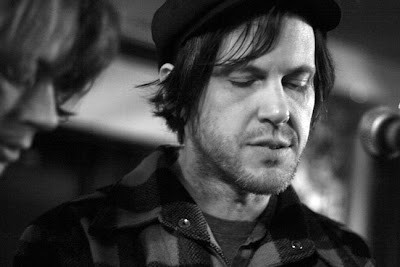 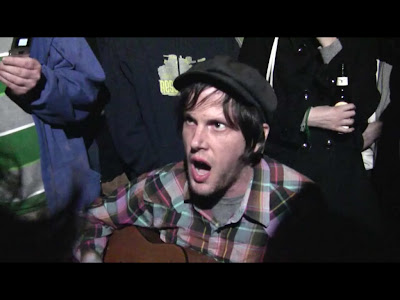 Above still from this guy.
Posted by Hughshows at 6:49 PM 2 comments: 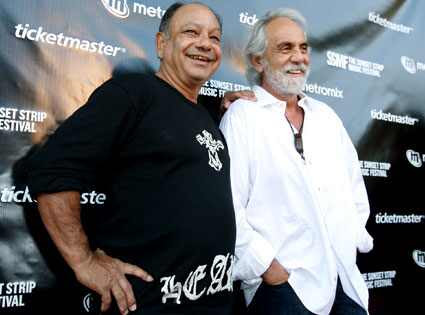 Cheech & Chong
Friday March 6, 2009
The Benedum Center
The car scene in Up In Smoke might be the funniest thing in a movie I have ever seen.
Posted by Hughshows at 7:23 PM No comments: 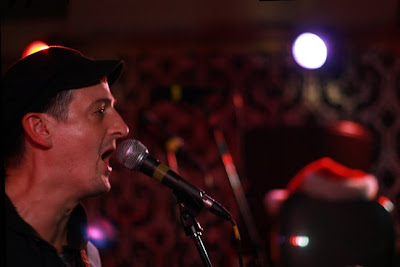 Elephant 6 Holiday Surprise Tour
The 63 Crayons
Saturday October 18, 2008
Brillobox
Lawrenceville
Everyone on stage was having a bg ole' partyof a time, none moreso than the Crayon's leader Charlie Johnston (although Will Hart was giving him a run for his money in the drinking department). By the end of the night he was so wasted that he almost destroyed Peter Erchick's keyboard.

Posted by Hughshows at 7:35 PM No comments:

Image of the Day-"Everything You Ever Hoped Or Worked For" 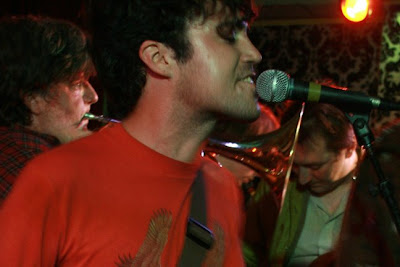 These guys were a pleasant addition to the show. I knew absolutely nothing about them before the night and they were definitely a highlight.
Posted by Hughshows at 8:10 AM No comments:

Image of the Day-"The Arrow Flies" 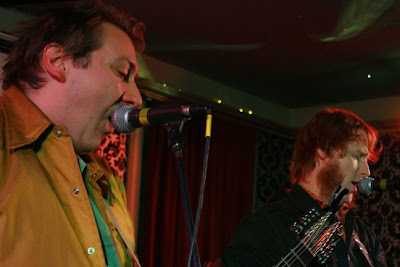 I have always wanted to see Elf Power and the several times they have been through town in the last few years I couldn't make it for some reason or another. They were probably the most straightforward pop band of the night. The stuff sounded very good live and I hope to catch them when they come back January 27th.
I know I go on and on about how appreciative I am of meetings bands and how rewarding it is to discover they are just as appreciative of me showing up. Practically all the musicians who played were very nice after the show. I have to say, head Elf Andrew Reiger was especially kind. He didn't give me money or anything but as a human being you can just tell these things.

Posted by Hughshows at 4:05 PM No comments:

Posted by Hughshows at 8:45 PM No comments:


Posted by Hughshows at 6:39 PM No comments:


Posted by Hughshows at 5:36 PM No comments:

Posted by Hughshows at 9:00 AM No comments:

Image of the Day-"A Sunshine Fix" 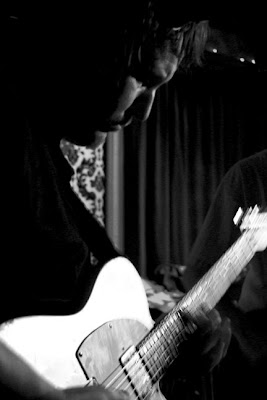 One of the bands on the bill I was very eager to finally see live was Olivia Tremor Control. Their albums have an unsteady flow to them, interspersing weird (read: dumb and unnecessary) noise interludes with some of the freshest psychedelic pop songs I have ever heard. Thankfully most of the 'real' tunes I love from the two albums I have were played. What really struck me that night was seeing front man Will Hart unleash his craziness. The guy seemed nuts sometimes onstage. I didn't notice a moment when he didn't have a drink in his hand (unless he was playing an instrument). After the show he was asking everyone and anyone for weed. He lost his voice half way through the show, I'm sure a little toke of marijuana would have helped.
I first met Bill Doss when he was playing with The Apples In Stereo. He assumed a more prominent role on this night. In fact, along with Julian Koster, he seemed to be running the gig. He is such a nice guy as well.

Posted by Hughshows at 10:11 AM No comments: