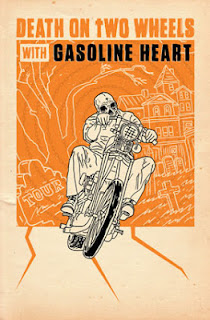 "Death On Two Wheels has spent the better part of the past year writing and recording their forthcoming album, due out Spring 2013. The self-produced labor of love was recorded primarily at Favorite Gentlemen HQ and Southern Tracks in their hometown of Atlanta, GA, and mixed by Brad Fisher (Manchester Orchestra, O'Brother). Amidst recording, the band has continued their constant road assault, performing nationally supporting acts like Lucero and Foxy Shazam as well as on the first annual Favorite Gentlemen Tour alongside All Get Out, Harrison Hudson, and Junior Astronomers.
The forthcoming self-titled album proves to be a more raucous journey than their previous record, Separation Of Church And Fate. Overall, the new material is a more focused vision of what the band has come to be known for: its raw, energy-filled live show. Vocally, Trae Vedder's (vocals, guitar) throat is captured in its truest form, as grit and gravel as ever before, with a new sense of definition in his delivery. Lyrically, he seems to have found a home mixing Southern Gothic slander with upbeat off-the-cuff tomfoolery. And musically, they've taken things up a notch, delivering an arsenal of guitar, organ, and drums by way of Andrew Averso (lead guitar), J. Betts (bass, vocals), Greg Neel (drums, vocals), and Daniel Gleason (organ, rhodes, vocals). Less twang, more bang - that seems to be the approach. This fivesome may have shed some of their southern skin, but the classic 70's meets grunge meets modern mashup is still in full force, capturing their wealth of influences in a more concise, no holds barred sort of fashion. 2013 looks to be the breakout year for Death On Two Wheels as they continue their onslaught of rock n roll know how."

You can check the band out on Facebook, Vimeo, Twitter and PureVolume. They are stopping in Pittsburgh this Saturday at Roboto on a bill with tourmates Gasoline Heart and locals Paul Kostick and Mighty. My thanks to Daniel Gleason (Organ) for participating in this edition of First/Last.

The first album you ever bought?
I was twelve years old when I was introduced to Nirvana. I came home from a 7th grade pep rally for the basketball team, turned on MTV and there he was, Kurt Cobain screaming at me about his libido. I immediately rummaged through my mom's purse for $15 dollars and rode my bike to the local K-Mart to buy "Live From The Muddy Banks Of The Wishkah". I bought every issue of Hit Parader or Circus that had Kurt Cobain in it and plastered my walls with pictures of the band. I read every biography I could and would draw their logo on every school notebook. Even then it felt like a huge moment, I never wanted the feeling that song gave me to end. The best moments for me musically touch on that.

Your last album bought?
Springsteen's "Wrecking Ball". I've recently become obsessed, and saw him when he came through Atlanta on this last tour. There is nothing like it. It’s the closest I've ever come to having a spiritual experience at a concert. This record and Converge's "All We Love We Leave Behind" are my two favorites of the year.

Favorite album of all time?
"No Code" by Pearl Jam. They are my favorite band and this is my favorite record by them. It’s a really interesting time for the band. This was the height of them pulling back and trying to leave the spotlight. It’s a record filled with stories of isolation and feeling trapped. Lyrically it’s one of the most personal albums I've ever heard and musically it’s so eclectic. I hear a lot of Neil Young influence on it, and this was during the time they were his backing band and touring with him a lot. I don’t think anything could ever top it for me. Also, I think my brother would hate me if I picked anything else.

Least favorite/most disappointing album?
That’s a really tough one. That Chris Cornell album produced by Timbaland has gotta be up there though. That one hurt.

First concert attended?
The day of my 8th grade orientation my brother took me to see Pearl Jam with Iggy Pop opening. This was on the "Yield" tour, and that record was the second I'd ever bought, after the aforementioned Nirvana album. That was the start of something special for me. If seeing the ‘Smells Like Teen Spirit’ video started my musical journey, I was walking without really knowing where to go. Seeing Iggy Pop and Pearl Jam that day gave a pretty good road map for where I wanted to head.

Last concert?
Mr. Andrew Averso and I went to A$AP ROCKY at the Tabernacle here in Atlanta. It really felt like the punk shows I would see growing up back in Michigan. Pure energy. Really fun.

Favorite concert ever?
My brother took me to the Pearl Jam Twenty festival in September of 2011 at Alpine Valley in Wisconsin. Being such huge fans we couldn’t miss it, and it was important to us both we experience it together. They had a little museum set up, booths with all the artists that do all their poster art, and of course an incredible lineup of bands. Glen Hansard was a highlight from the side stages. Especially when Eddie Vedder joined him for ‘Falling Slowly’. At that particular time in my life I was dealing with something that felt pretty profound and that song, in that moment, reminded me that its O.K. to let go of pain, even if it’s the only thing that keeps you close to what you aren’t ready to let go of. Pretty sappy, right?
Of course the main stage was unbelievable. Mudhoney opened, followed by Queens of the Stone Age, then the Strokes, and finally Pearl Jam. The big surprise, and what everyone had suspected might happen, is that Tempe of the Dog reunited for the first Pearl Jam encore. I must've been 13 or so when I first heard ‘Hunger Strike’, and it’s always been one of my favorite songs. "I dont mind stealing bread from the mouth of decadence". What a line. Never thought I'd get to hear it live, let alone standing next to my brother. Can’t really describe just how GOOD Chris Cornell sounds live, but I really hope I can see Soundgarden if they come through Georgia.
The reason I can’t ever see this experience being topped for me is because I've never seen a band play with such gratitude before. You could see it on their faces, they really can’t believe they've made it 20+ years. There were so many incredible moments. Looking back at the crowd for 30k or however many and seeing flags waving at you representing countries from all over the world. The crowd singing the ending falsetto to ‘Black’ for over two minutes after the band had faded out. Eddie writing a song just for that day. Incredible. It truly was one of the best days of my life. Thanks, Sean.

Least favorite concert?
Trying to remember negative music experiences is a lot harder than you'd think. I saw Drake perform at Voodoo Fest and the whole thing struck me as very fake. Not a big fan of his.

Any thoughts, experiences about Pittsburgh?
Mario Lemieux is one of my favorite hockey players ever. First thing that pops into my head when I think of Pittsburgh is Andy Warhol. I've never been to the Andy Warhol Museum, but I’m hoping that changes on this trip. I think Andrew McCutchen is a hell of a ball player. One of my favorite metal bands ever is Zao and I think they are from metro Pittsburgh. People that think it’s funny to call it "Shitsburgh" are unimaginative. Lookin’ at you Sienna Miller.

Thanks, Daniel. Your description and lasting memories of that Pearl Jam Fest is exactly what it's all about, man. Too cool!
Posted by Hughshows at 7:30 AM