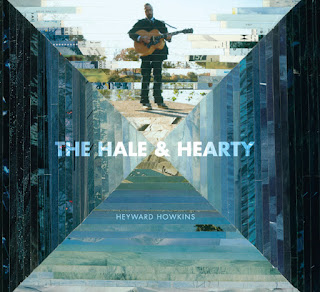 “By the side of the sleepy canal . . .” and a beckoning bed of strings. So begins The Hale & Hearty, the debut release from Heyward Howkins. Produced by Chet Delcampo (an accomplished artist in his own right who has been linked with Smokey Robinson, Kid Congo Powers, David Lovering, and Fred Myrow). Like a patchwork suit, it’s equal parts British tweed (see Nick Drake, John Cale, The Smiths) and dusty American flannel (see Bon Iver, M. Ward, Damien Jurado). Heyward has crafted an album with diverse sounds and surprising arrangements that compliment, but never overwhelm, his evocative melodies and lyrics. Paying tribute to his family’s long and storied history, Heyward takes his name from his five-times grandfather Thomas Heyward (dubbed “The Singing Signer”), founding father and signer of the Declaration of Independence. Other members of the Heyward family are called out in the song Spanish Moss, featuring the lyrics, “Brimmed hats on babes in waiting / Magnolia is housing / Heywards on cotton couches.” References to Savannah cotton magnate Jacob Guerard Heyward are contrasted with his middle-class Philadelphia existence, which Heyward sings about with love and empathy, “My city’s cold and naked / Who’ll wrap an arm around it?”

Philadelphian Heyward Howkin's debut album, "The Hale & Hearty" was recently released and has the distinction of having a favorite of mine in Shannon McArdle contributing vocals on the last track, 'Hudson Piers'. My thanks to Heyward for taking the time to participate in this edition of First/Last.

The first album you ever bought?
Pretty sure it was the The Beastie Boys, “License to Ill”.


Favorite album of all time?
That is a tough call. Probably “The Queen is Dead” by The Smiths or The Cure, “Standing on the Beach”.


Least favorite/most disappointing album?
I love the band Beachwood Sparks but I wasn't digging their latest record if I am honest.


First concert attended?
It was either Depeche Mode or Living Color.


Favorite concert ever?
Had to be Depeche Mode in 8th grade because I got to hang out with them backstage. I even played a two player video game with Martin Gore!! Also, seeing Belle & Sebastian was pretty rad too.


Least favorite concert?
I guess I am lucky or very selective because I really enjoy every concert I attend.
Any thoughts, experiences about Pittsburgh?
Apart from a healthy hatred of all Pittsburgh sports teams, I find your city to be very pleasant. The polish food isn't bad either.

Thanks, Heyward. Healthy hatred of all PGH sports teams, huh? Right back at ya bro! The Flyers? Phhhttt...
Posted by Hughshows at 12:56 PM