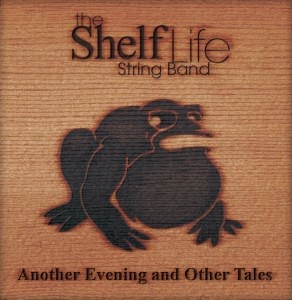 "The Shelf Life String Band is your local, untraditional bluegrass five-piece with a solid repertoire of musical delight. These boys and gal will keep the energy high with their full bodied, feel good sound, captivating crowds old and young alike."

Check out the band at their official Website, Facebook, YouTube, MySpace, SoundCloud and Twitter. I have seen this band a bunch of times during their ongoing residency at The Park House and they were also kind enough to back Western Pennsylvania for an unforgettable set at HughShows 10.2 in February. They head up 28 and cross the Allegheny River to hit up Bloomfield and Howlers for their CD Release gig tomorrow night with support from The Lone Pine String Band. Not only are they putting out new music in an album called "Another Evening and Other Tales", they are unveiling their own beer appropriately titled Shelf Life India Pale Lager brewed by Brandon McCarthy and Rock Bottom Brewing! I want to thank Joe Dep (Banjo/Vocals) and Trish Imbrogno (Dog House Bass) for taking a few to participate in this edition of First/Last.

The first album you ever bought?
Joe Dep: Greenday “Dookie”.
Trish Imbrogno: Madonna “True Blue”, unless you count the “Sesame Street” record I had when I was way young (I don’t think I personally bought that one, however).


Your last album bought?
Joe: Jesse Cobb “Soulitude”.
Trish: Wow. Itʼs been a while since Iʼve purchased a full album. We keep getting free copies at shows, as bands for whom I’m in a supporting act tend to give me a disc. I think the last one I actually bought was Marco Beneventoʼs “TigerFace” (on vinyl).


Favorite album of all time?
Joe: I've been seriously indulging in music for over 20 years. Depends on the day.
Trish: Itʼs really hard to have a favorite album as I tend to like something off of everything or wouldn’t own it. As an entire album, The Grateful Dead “Workingmanʼs Dead” is pretty smoking from start to finish. So is the Stonesʼ “Exile on Main St.”, The Wood Brothersʼ “Ways Not to Lose”, Paul Simon “Graceland”... I could do this all day.


Least favorite/most disappointing album?
Joe: Same as 3.
Trish: Again, I could list a ton of albums with tracks I find disappointing. As a whole, Metallicaʼs “Black Album” was a huge fail (and then every album that succeeded it).


First concert attended?
Joe: The Ezekiel. A local PIttsburgh band. I think I was twelve. The first time that I can recall where live music really touched me. Seeing guys around the same age as me playing music that sounded like the stuff I'd buy from an album. Was a fantastic and huge inspiration to me. Just like when my eyes were opened to the idea that I could potently play bluegrass music seeing the Mon River Ramblers (21-22 years of age) another local band play. Made me feel as though this was something I could do.
Trish: This is possibly the most embarrassing thing ever... Warrant, Trixter, and Firehouse at the Erie Civic Center. I had seen Sha Na Na and Up with People when I was in elementary school, but the Warrant show (sadly) was my first show as a teen. I’m going to try to redeem myself a little here... the following year I saw Faith No More, Metallica, Guns n Roses at Rich Stadium in Buffalo and Lollapolooza at Starlake the next year.


Last concert?
Joe: Local Boston music. I try to see about 3 to 4 shows a week so they all get jumbled together.
Trish: In the last week I’ve played a Butler Symphony concert with clarinetist Sal Andolina, and saw Sam Moss, Corey Evan Levine, The Delta Saints, Joe Robinson, Omega Swan, and The Black Lillies. The most recent was Sam Moss/Corey Evan Levine at Acoustic Music Works.


Favorite concert ever?
Joe: Too hard to pick. But the ones that really get my fired up and I'm on a music high for days.
Trish: The Dead, Three Rivers, June 1995. If you don’t know about the “rain” set, I’ll enlighten you sometime... legendary. If the orchestra would have been better in both cases, I would have a tie between Trey Anastasio and the Pittsburgh Symphony (but the PSO shit the bed all over the charts) and Warren Haynes with the San Francisco Symphony (This was sick - on Jerry Garciaʼs birthday and Bobby Weir and Jeff Chimenti came out and played. Again, the orchestra sucked; they were shameful, actually, for the amount of money they’re paid and the caliber to which they can play).


Least favorite concert?
Joe: I try to block those shows out.
Trish: Pittsburgh Symphony PNC Pops Viva Las Vegas in May 2008. There were dudes dressed up like Vegas music legends of yore (Sinatra, Liberace, Elvis, etc) singing, playing piano, and bantering as the soloists. It was a Jack Everly “Pops in a box” show and it was the cheese-ballest thing I had ever seen. Pete and I got there late, like a few tunes before intermission, and left at intermission.


Favorite thoughts, experiences about Pittsburgh?
Joe: Greatest city in the world and I have confidence with the batch of local musicians and talent we have in our city right now. That hopefully in a few years will show the whole world what they have been missing. We play music our own way and we do it with pride.
Trish: Ah, Pittsburgh. It’s probably the best kept secret in our country. I came here in 1994, spent five years at Duquesne and headed to grad school in Akron. From there, the left coast sucked me in and I didn’t think I’d look back to snow from sunny L.A. But, alas, I’ve been back since 2002 and unless I get an offer for millions, fame, and fortune, I don’t think I’ll leave. We have a really special city - it’s a small town with big buildings, a thriving arts scene that could be envied by mega metropolitan areas, and views comparable to cities in Europe. Our local music scene is amazing. Musicians support each other, there is an overall push to make it thrive and keep it strong, and there is a growing circle of non-music professionals who are investing in bands and promoting them in an increasing number of venues. There was a point when I had moved back that the live music scene was fairly nonexistent. Like the city itself, the scene has been riding a wave of growth and redefining how the world perceives us. There’s more to do here than you can accomplish in a lifetime (unless you’re mega rich, never have to work, and can live a life of complete leisure). You have to want to enjoy what we have, however, which many Pittsburghers don’t get. I hear so many people complain about this city, and they’re crazy. Shit is happening here and it’s, for the most part, good. Whatʼs not to like? It’s a place where you can’t make a mistake because everyone knows you within three degrees of separation. Fuck up or piss off the wrong person and you’re screwed – no matter what your industry. It’s a “who you know” city, which has created a culture of accepting mediocracy as the norm. However, with a Mayor who seems to be bucking this trend himself, possibly we will see more of the right people with the right experience in the right positions that can lead Pittsburgh into a state of long-term economic stability.