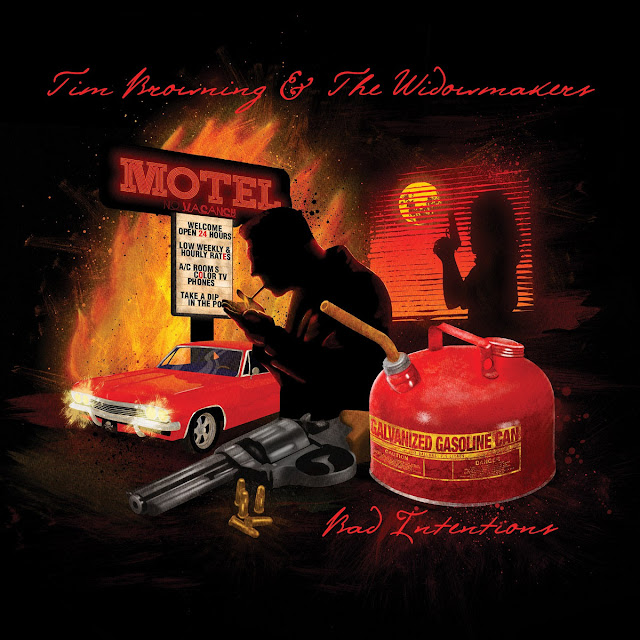 "Tim Browning and the Widowmakers hail from the deep dark hills of Appalachia. Fusing together the dark folk/country roots of Johnny Cash with the harmonised guitar-lines of Gorham and Robertson (Thin Lizzy), they weave tales of back alley justice and crimes of passion in a world that has moved on."

Tim Browning & the Widowmakers are a folk rock Americana band from Logan, WV.  The band is self described as "a little bit Country, and a whole lot of Rock & Roll," which is very evident on the band's recent debut Bad Intentions. I want to thank Tim (Guitars/Vocals) for taking the time to participate in this edition of First/Last.


The first album you ever bought?
The Beach Boy's All Summer Long on cassette. I had a conservative upbringing but my parents allowed me to listen things they were already familiar with and deemed suitable. I was a big fan of the movie "Flight of the Navigator" that came in 1986 that featured "I Get Around."


Your last album bought?
I just picked up Canadian artist Megan Nash's Song Harvest Volume One, which was recommended to me by another great Canadian artist Colter Wall and his manager Mary Sparr. I've had the good fortune of crossing paths with them twice in recent months and Colter's Imaginary Appalachia, has been heavy in my rotation so I took the bait. "I'm Only Somebody," is my personal favorite from Megan.


Favorite album of all time?
I don't know that calling it my favorite would suffice. I would call it the most important. My Grandfather on my Mother's side had a cassette of Hank Williams & His Drifting Cowboys' Moanin' the Blues. That album molded so much of who I am and it continues to be a staple for me now 32 years later. I don't think you can find a part of life that isn't represented on it. "Long Gone Lonesome Blues," is engrained in my DNA.


Least favorite/most disappointing album?
The last time I remember being thoroughly invested in an artist to the point of truly anticipating their next release was Andy Stochansky's 2005 record 100. I had fallen in love with his album Five Star Motel, in 2002 and knew every single lyric and note. He hasn't released a full-length since so maybe I wasn't alone in my disappointment.


First concert attended?
I've never been much of a concert goer. That seems to shock folks when it comes up but it wasn't something my family participated in growing up. Money was tight and my parents grip was even tighter so independent and local music was where I got my fix. The most memorable concert I have seen was Vigilantes of Love in 2001. Bill Mallonee is one of my songwriting heroes so that's the first one that really mattered. They were playing the songs from Audible Sigh, which was produced by Buddy Miller and featured Emmylou Harris. They were just at the top of their game.


Last concert?
Toad the Wet Sprocket and Counting Crows in 2014. Dulcinea, and August & Everything After, are two of the most important albums of my teenage years so that was a bucket list item. Since then I have invested all my time and money in making music. If I attend a show nowadays odds are I'll be on stage at some point.


Any thoughts, experiences about Pittsburgh?
I've enjoyed Pittsburgh any time I have had the opportunity to visit. Hopefully my band the Widowmakers and I can make it up in support of our new album Bad Intentions.

Thanks, Tim. Would love to see you and the band head into Pittsburgh for a show soon. Let me know when and if you do.
Posted by Hughshows at 8:37 AM