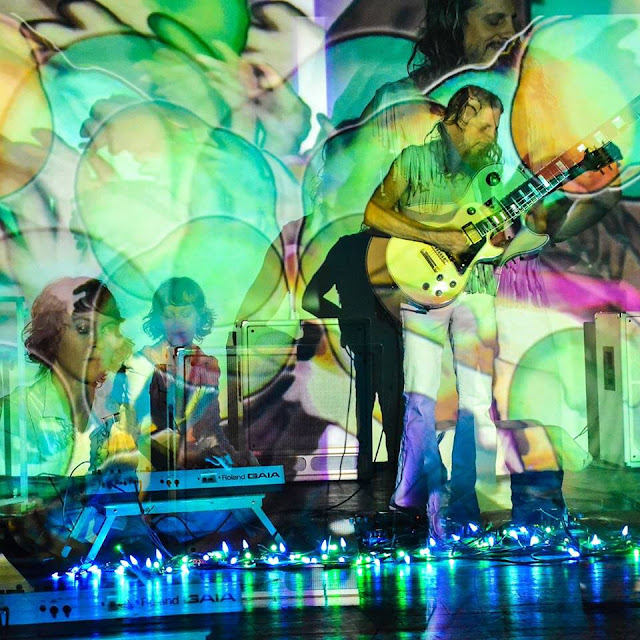 "Transcendental audio/visual rock duo Darsombra have packed and prepared their shuttle for launch, readying themselves for journey to inner space. Brian Daniloski (a veteran of metal bands Meatjack and Trephine), pilots, navigates, and controls the sound of Darsombra, alternating between searing guitar riffs, leads, loops, mammoth vocal swells, and soundscapes. He takes one part metal, one part psychedelic rock, one part experimental, and dashes of prog, glam, and krautrock, to soundtrack the voyage. Filmmaker Ann Everton joins him on vocals, synthesizer, and percussion, as well as stewarding us along the way by projecting her kinetic, psychotropic videos specifically composed to the music, engulfing the audience within the trip."

darsombra is an audiovisual heavy psychedelic rock band from Baltimore, MD who hit up Pittsburgh Friday (10/2) at The Smiling Moose on the Southside with locals Broughton's Rules and Old Dream. I want to thank Brian Daniloski (Guitar/Vocals) and Ann Everton (Keys/Visuals) fort taking the time to participate in this edition of First/Last.

Your last album bought?
Brian: I bought 2 Magma vinyl reissues at the same time – “Attahk” and “Mëkanïk Dëstruktïẁ Kömmandöh”.
Ann: I can’t remember the last album I bought, but I clearly remember buying the Rolling Stones’ “Sticky Fingers” at a flea market in Baltimore and feeling my life changing as the transaction occurred.

Last concert?
Both: We just saw Melvins play Bumbershoot Festival in Seattle the day after our Seattle show. Going to this concert was totally unexpected and a nice surprise before we headed off to play in Olympia that evening!

Favorite concert ever?
Brian: Butthole Surfers - Baltimore 1987. This show changed my life. I largely credit this concert with having a lot to do with me being where I am, and doing what I do, today. They put on a totally mind altering show and I wasn’t even on drugs.
Ann: There have been many favorites, but most recently my mind was blown by Magma in a little theater in Quebec City in May 2015 - we were in the middle of the front row!

Least favorite concert?
Brian: Neurosis - Richmond, can't remember the year. Only because we never got south of DC on our way there from Baltimore. Somebody was threatening to jump off some bridge and completely shut down the DC beltway and vicinity. So we never got to see the show, but a friend and I did sit dead stopped on the DC beltway for hours before giving up and turning around.
Ann: Getting dragged to see Limp Bizkit at a festival in the late 90s. It was all a misunderstanding.

Any thoughts, experiences about Pittsburgh?
Both: Pittsburgh has food and rocks and water and incredible cemeteries and we love it! Brings out your freaks!

Thanks, Brian and Ann. Ann, that is the single most kick-ass first album answer I have ever heard from any musician since I have been conducting these interviews!
Posted by Hughshows at 5:28 PM