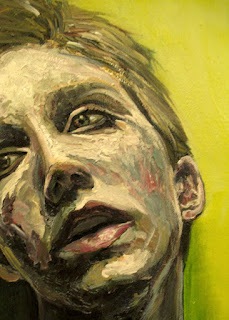 "Both fierce and delicate, Clara Engel’s music is reminiscent of an era in history when theatre, art, and music were an integral part of a bigger and more vital whole, an era that the 21st century is craving more than ever. Poet Janaka Stucky describes Engel’s work as “timeless songs that sound at home in the ribcage of rock n roll’s skeleton." The underground, multi-faceted Canadian artist has independently released eight albums, and collaborated with musicians from the UK, Germany, Brazil, and the USA."

Clara, who is a Toronto-based musician,  is independently working on her next album which will be finished before 2013.You can help her out by contributing here. Check out some of her previous music here. My thanks to her for participating in this edition of First/Last.

The first album you ever bought?
I think it was The Beatles “Greatest Hits, Vol 2”.

Your last album bought?
“The Bees Made Honey in the Lion's Skull” by Earth, and “At the Cut” by Vic Chesnutt. I bought them together.

Least favorite/most disappointing album?
I don't have one. I tend to leave those experiences behind, just forget about them.

First concert attended?
Bob Dylan at some big outdoor venue in Montreal when I was fourteen.

Least favorite concert?
Probably a show that I got roped into playing, years ago, that turned out to be some sort of 'Battle of the Bands'. Can't recall the details.

Any thoughts, experiences about Pittsburgh?
I would love to sing there someday... I haven't had the pleasure of visiting yet.

Thank, Clara. I am always willing to support a DIY artist. Drop a line if you ever make it down south to Pittsburgh!
Posted by Hughshows at 7:30 AM