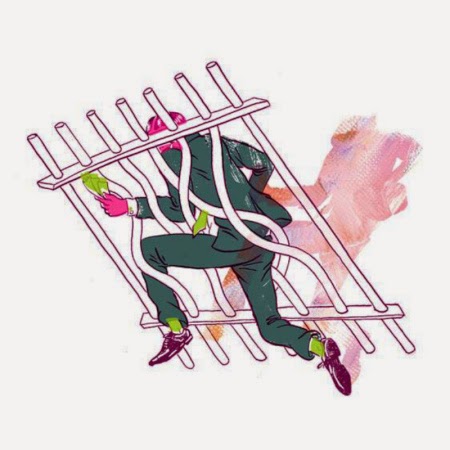 "There are plenty of musicians who write music with dark themes; a lot of it just comes from overactive imaginations. Then there are musicians like Shaky Shrines songwriter Braden Faisant. He, uh ... actually works in a cemetery all day. You might feel a bit uneasy when you throw on Shaky Shrines' full-length, Mausoleum, even before the music begins. It's by design. The death-comes-for-us-all vibe starts with the cover art (pictured above), which depicts the band's members attending what appears to be bassist Nate Campisi's funeral. Then take a look at the track titles: "Strangers' Eyes," "Dark, Dark Houses," "Someone's in the Basement." - Andy Mulkeren (Pittsburgh City Paper)

Check out the band at their official Website, Facebook, Tumblr and BandCamp. The Pittsburgh 'psych-garage rockers' are preparing for the release of their new EP, "Hocus Bogus" and will be playing selections from it at Brillobox this Thursday night with fellow freaksters Outsideinside and Aqua Nebula Oscillator. I want to thank Braden Faisant (Keys/Effects/Vocals) and Nate Hanson (Guitar) for taking the time to participate in this edition of First/Last.

The first album you ever bought?
Braden Faisant: The Who “Live at Leeds” on cassette.
Nate Hanson: Led Zeppelin “Houses of the Holy”.


First concert attended?
Nate: The Pixies reunion show at what was then the IC Light Amphitheater was the first concert that I went to with my friends without someone’s parents going to chaperone. It was on the last day of school during my freshman year of high school. My friends and I skipped school and took the T down to watch the show. I fought my way to the front of the stage and hung on for dear life as I watched Joey Santiago shred. It was awesome.


Favorite concert ever?
Braden: Dr. Dog.
Nate: I saw Deerhunter play the hottest, most crowded show I’ve ever been to at Garfield Artworks in 2008, right before “Microcastle” was released. You could tell that they were testing out material from the new record and also getting used to playing really crowded rooms in places like Pittsburgh for the first time. I think that the last time they were in Pittsburgh before that show, they played the CMU cafeteria to like 25 confused kids on the “Cryptograms” tour. I remember talking with Bradford Cox while waiting in line for the bathroom, and he was one of the nicest, most down to earth people I’ve ever met. By the end of the show, it was so hot in that room that even stepping out into what was probably an 85 degree night outside felt like walking into a walk-in cooler. The only thing keeping me inside the show was how good the band was,  the heat felt like it was going to make my chest explode.


Least favorite concert?
Nate: I had to do sound for a battle of the bands at Pitt once, does that count?

Favorite thoughts, experiences about Pittsburgh?
Braden: The ‘NO SLEEVES NO RULES’ attitude.

Thanks, fellas. Loved last year's album. Can't wait to hear the new stuff.
Posted by Hughshows at 5:35 AM