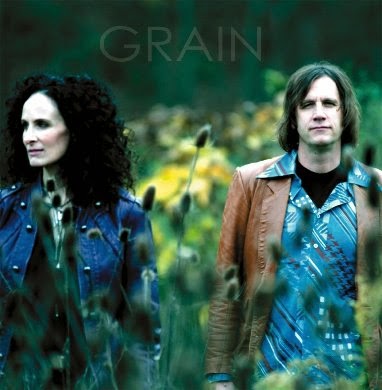 "The humble beginnings of what woul become GRAIN began at a books & music store, in Pittsburgh, PA., as Wayne Smith (guitars) and Carla Simmons (vocals, words) perfected the art of avoiding customers and hiding from management, all the while working on plans to start a rock and roll band. The mutual experience of growing up on 70's rock along with an appreciation for country music, disco, punk rock, and the 8-track tape would help shape the vision for straight ahead, guitar driven songs with lush arrangements and a raw sensibility. Grain has been rocking the steel city, as well as taking their act on the road. Come on, grab your Terrible Towel and check out the band Amplifier Magazine calls, "...one of the most exciting bands to watch."

Check out the band at their official Website, BandCamp and Facebook. The Pittsburgh rock duo's third release is called "Echoes in the Air" from 2012 via Orange World Records. Much thanks to Wayne Smith (Guitar) and Carla Simmons (Vocals) for taking the time to participate in this edition of First/Last.


Favorite album of all time?
Wayne: too many... “Frampton Come Alive”, Ornette Coleman “The Shape of Jazz to Come”, the first six KISS albums...
Carla: This is REALLY hard. I had to pick records that changed my thinking or in some way changed my direction in life so... “Ziggy Stardust” (Bowie), “Los Angeles” (X), “Frampton Comes Alive”, pretty much any Led Zeppelin record... the list goes on.


First concert attended?
Wayne: Not sure... my parents took me to many when I was very young, but the first without an adult was Van Halen “1984” tour, Civic Arena.
Carla: Eric Clapton, Civic Arena (“Slow Hand” tour).


Favorite concert ever?
Carla: The Clash, Stanley Theater, 1982 (amazing show!). Talking Heads, again at the Stanley Theater. Black Crowes with Jimmy Page, First Niagara Pavilion, would have been even better in a smaller venue.


Least favorite concert?
Wayne: The Band at Metropol. Awful.
Carla: George Jones at the Pepsi Roadhouse. I know he's a legend and I shouldn't complain, but he basically did a medley and walked off the stage. Also, although I’m not a fan, I had to stand through Alice in Chains, at Metropol. They opened for Iggy Pop (sometime in the 90's).  Iggy was great. Alice in Chains, awful.


Favorite thoughts, experiences about Pittsburgh?
Carla: Pittsburgh has so much going on in terms of the arts, particularly music. However, we always need more people interested in going out and supporting local music. It keeps the community thriving and having fun! Now, if Pittsburgh could just get all that road construction under control…

Thanks, guys. Yeah, Wayne, that Band show at Metropol is LEGENDARY for being so damned horrible.
Posted by Hughshows at 6:29 AM