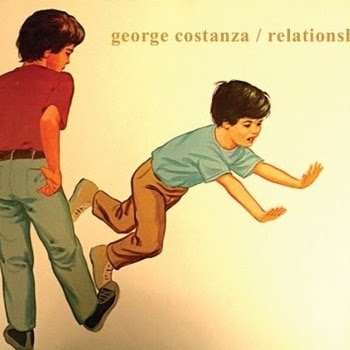 Relationships is a dwingly emo band hailing from Pittsburgh, PA. All of the members came from other Pittsburgh bands (Steve Chab, Means to And End, Coal Miner, Overseas) and the original line-up was formed in August of 2011: Josh Giacometti (Guitar/Vocals), Chris Duranko (Bass/Vocals), Justin Watkins (Guitar/Vocals), and Eric Ross (Drums/Vocals). After their self-titled EP was released and after about eight months playing together, Justin Watkins amicably left the band. He is now a member of the band A Life of Arctic Sounds. The rest of the line-up remained the same and in October of 2012, Relationships released their newest EP titled ‘Get Busy Livin’ or Get Busy Cryin’’ on limited formats (cassette/CD).


Relationships tries to take the classic clichés in ‘emo’ and ‘twinkly emo’ and twist them around in various ways to make something people already love into something people are going to really love.  They use the term ‘dwingly’ more as a joke than anything, but its purpose is also to represent their molding of ‘twinkly emo’ into something that they can call their own.
Ross, Duranko, and Giacometti continue to take their claim in the emo world with their upcoming releases through Driftwood Records. The band will be releasing a split with their good friends from Michigan, George Costanza, in late January. The split will be available direct from Driftwood Records or through the band (on cassette). Relationships is also Driftwood Records February artist for their ‘lathe of the month club’. Each month in the year of 2013, Driftwood Records is releasing a 5” one song lathe with screen-printed b side. All of the artists’ songs will be exclusive to this subscription and Relationships’ ‘Skip for Shipment’ is going to be February’s feature. You can pre-order the subscription here.

Check out the band on Facebook, Tumblr, BandCamp and Last.fm. They recently released their split single on (red clear) cassette with George Costanza via Driftwood Records. My thanks to Josh Giacometti (Guitar/Vocals), Chris Duranko (Bass/Vocals) and Eric Ross (Drums/Vocals) for taking the time to participate in this edition of First/Last.
The first album you ever bought?
Josh Giacometti: The first CD I ever bought was Blink-182’s “Enema of the State”. Even though it was my money, my mom still had to buy it for me because I was just a lil’ tyke. First vinyl I ever bought was Everyone Everywhere’s test pressing of their first album.
Chris Duranko: Eiffel 65, “ Europop”.
Eric Ross: The first album I bought with my own money was “KISS Alive II” on cassette.

Your last album bought?
Josh: I think it was pre-ordering Brave Bird’s newest LP. I think.
Chris: Colored Owen vinyls, “At Home with Owen” & “No Good For No One Now”.
Eric: I bought the Boys Night Out, “Trainwreck” 2XLP for my girlfriend. Does that count?

Favorite album of all time?
Josh: The Doors’ “LA Woman” for multiple reasons. I met my wife through a friend because we both really dug The Doors, and even though Jim Morrison totally was a hunk, I always loved Robby Krieger’s guitar playing (especially on “LA Woman”).
Chris: Radiohead, “The Bends”.
Eric: Difficult question. Quick answer, Converge, “Jane Doe”.

Least favorite/most disappointing album?
Josh: I hate to go back to Blink-182 on this one, but their S/T LP broke my heart. There are moments that really shine through and show them pushing forward while still retaining some of their roots, but as a whole, this album pushes the mold too far. Thankfully, their newest LP, “Neighborhoods”, was able to pull me back in (but “Dude Ranch” will always be my favorite).
Chris: I really can’t think of anything.
Eric: At first listen I was really annoyed by “Good News for People Who Love Bad News” by Modest Mouse. Then it did grow on me. I still only really like half the songs on the album, though.

First concert attended?
Josh: I saw Sting with my dad when I was 15-ish; dude was awesome.
Chris: Punchline at Metropol.
Eric: CKY at Metropol in the Strip District. Some band no one had heard of before was supposed to open for them but according to Chad, "They stole their beer and they kicked them off the tour." That band was The All-American Rejects.

Last concert?
Josh: Probably about three months ago with I Can See Mountains, Ribbons, and The Traditional.
Chris: Have Mercy!, Brightside, Ribbons, and Dads at Ormsby.

Favorite concert ever?
Josh: I saw Steve Winwood with Eric Clapton in Columbus one year. They played the entire “Blind Faith” album. I’m a huge fan of Eric Clapton’s guitar playing, especially the early days in Cream and Blind Faith.
Chris: I saw CKY at Mr.Small’s and it was great; such high energy.
Eric: Probably Algernon Cadwallader back in June. RIP.

Least favorite concert?
Josh: Hope On a Rope with Overseas at The Royal Place. Some dude with no shirt on spit in my hair and made everyone sad/mad.
Chris: Every noise show Eric Ross (our drummer) has every played, hahaha.
Eric: Played with this band called Lightweight once at Gooski's. Their singer was fucked up on booze and percocets showing his dick to everyone and trying to start fights while falling off the stage. GG Allin rolled in his grave.

Favorite thoughts, experiences about Pittsburgh?
Josh: Seeing Empire! Empire! (I Was a Lonely Estate) in a cramped basement definitely tops my list of best Pittsburgh experiences. Without our tight knit community things like that wouldn’t be possible. It really is a great time to be active in the Pittsburgh music scene.
Chris: I’ve been playing music in Pittsburgh for several years now and it has a lot of great small places for new bands to go play without having to sell a bunch of tickets or other money ordeals. There are a lot of nice venues that focus on the thing that matters the most and that’s the music and the performance, rather than money and politics.
Eric: Pittsburgh is small so it's easy to get in contact with everyone in a hurry if need be. Two instances we had something go wrong with venues and shows getting canceled and within the hour had another spot set up to move the show to. It's awesome here.

Thanks, guys. Noticed that the guys from Grand Piano assisted in the recording of your latest release. Those dudes are cool, IMO. Wait, Algernon Cadwallader, RIP? I dug that band.
Posted by Hughshows at 7:30 AM