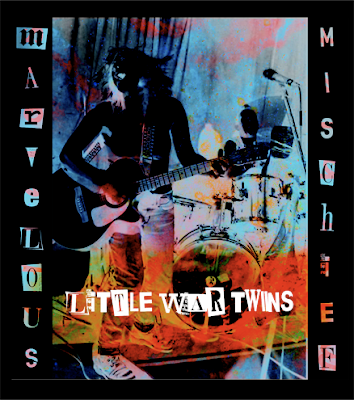 "We are Little War Twins, Boston's Folk Renegade Mystics, and we have come forth through the storm to awaken the thunder and lightning in you. We bear this truth to you: You are strength. You are electric. You are whole. Together Little War Twins stands as a tribe, threading together a tapestry of sounds that is as unique as the instrument we sheath."

Check out the band at their official Website, Facebook, Twitter, ReverbNation, BandCamp and Pinterest. The band headlines Howlers tonight with support from locals  Antimony and The Ne'er-Do-Well. I want to thank Gaetana Brown (Vocals/Acoustic Guitar) and Patrick McConnell (drums) for taking a few minutes to participate in this edition of First/Last.

The first album you ever bought?
Gaetana Brown: “Tragic Kingdom” by No Doubt.
Patrick McConnell: I know I had been gifted a few CDs at first, bizarre ones like Charlie Daniel's Band (for ‘Devil Went Down to Georgia’, of course), “Big Willie Style” by Will Smith and a Tower of Power album. There was definitely something before this, but the only memory I have sticking out really in my mind was buying Tool's “Lateralis”.

Your last album bought?
Gaetana: “Nathaniel” by Fifth Nation.
Trick: The most recent album I've bought was Licious's "Jelly". They are a fantastic up-and-coming band and you should check out their music here.

Favorite album of all time?
Gaetana: It's a tie! WHOKILL by tUnE-yArDs and “Pink Moon” by Nick Drake.
Trick: An unfair trap of a question. I'll try to give the shortest desert-island-top 5.Steve Reich’s “Music for 18 Musicians”, tUnE-yArDs’ “WHO KILL”, Tool’s “Aenima”, Fela Kuti & Ginger Baker’s “LIVE” and Elliot Smith’s “XO”.

Least favorite/most disappointing album?
Gaetana: I disagree with this question.
Trick: Tyler the Creator, “Goblin”...maybe I haven't given it enough of a chance, or more likely is that the whole point of Odd Future and co. cannot be captured on a mere disk or mp3,
but for a single as mind blowingly and mood-achieving as 'Yonkers', the other tracks seemed like c-side inside jokes that just aren't meant for me. No big deal there, just the way it is.

Favorite concert ever?
Gaetana: tUnE-yArDs at The Ironhorse in North Hampton, MA. Super intimate venue watching my favorite superhero... what's better than that?
Trick: Fourway way tie and I'll stick with national/major label artists here so there’s a chance some of you can relate to this. And in no order: Tool (‘10,000 Days’ tour), Nine Inch Nails, Jeff Beck, Chicago + Earth Wind & Fire.

Least favorite concert?
Gaetana: Nothing comes to mind.
Trick: Mars Volta, not because they didn't play phenomenally, but because the sound was blisteringly too loud and all treble. I had to run into the bathroom of House of Blues, soak paper towels and shove them in my ears before returning to the concert hall. Believe it or not, that gesture did little to help the situation.

Any thoughts, experiences about Pittsburgh?
Gaetana: I am excited to see what it's like!

Thanks a lot you two. Sounds like a real solid bill tonight! Hope you can see a bit of our city while you're here.
Posted by Hughshows at 7:30 AM