First/Last - Colin and the Crows 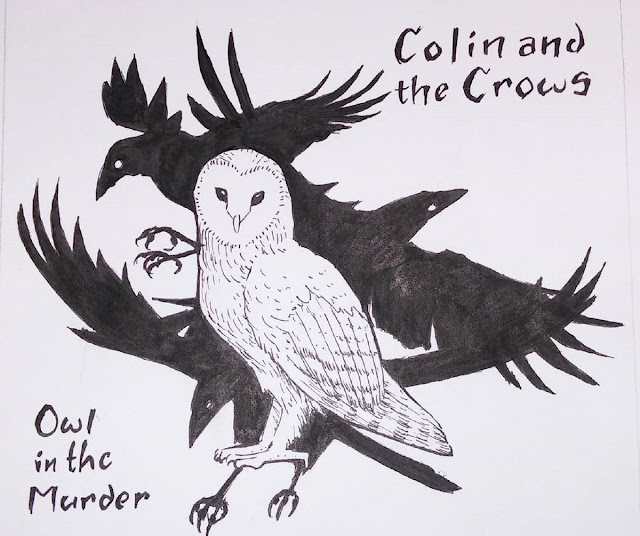 "Smooth and sweet, sometimes psychedelic, the band mainly consists of the Songwriter/guitarist Colin A, the Violin player Aaron Pollard, and the Bass player James "earthworm" Bristol. Other members jump in every once in a while, including a saxophone, drums, piano, and trumpet."

Colin and the Crows is a Pittsburgh based alt-folk band that is associated with a loose collective of local bands including The Hills and the Rivers and Cousin Boneless. They released their debut late last year entitled Owl in the Murder and have just returned from a five week tour (where the following questions were answered.) I thank songwriter Colin A. (Guitar/Vocals) for taking the time to participate in this edition of First/Last.


The first album you ever bought?
Probably soul junk or of supertones, something from a Christian bookstore (the only place at the time we were allowed to buy CDs.)

Your last album bought?
The last album I bought was by the Ditrani Brothers.

Favorite album of all time?
Would have to be Demon Days by the Gorillaz.

Last concert?
Last night in Fort Worth, TX with the Hills and the Rivers.

Favorite concert ever?
We play a lot of shows so it's hard to pick a favorite. But I guess I would say Share Festival near Harrisburg was my favorite so far.

Least favorite concert?
On tour in Phoenix Arizona, nobody was there.

Favorite thoughts, experiences about Pittsburgh?
One of my favorite things about Pittsburgh is the artistic community, there's always something going on, and busking or street performing is always appreciated.

Thanks, Colin. Busking to me is the most underrated aspect of the local music scene and I really appreciate your mentioning it. I have been hoping for several years now to see a strong and vibrant presence of street performers at every major music festival in town, Deutschtown included.
Posted by Hughshows at 8:00 AM

Labels: Colin and the Crows, First/Last