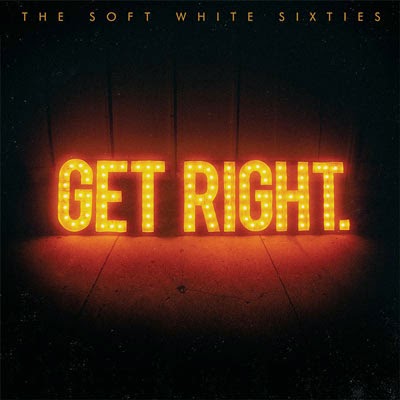 "Named as one of Paste Magazine's "Top 25 Shows at SXSW 2013", The Soft White Sixties are increasingly gaining recognition for their infectious live performance. Since 2010 they have been perfecting their sound, appropriately dubbed Working Class Soul - a gritty edge to modern pop. They mix their vast influences into a hard-hitting and confident force reminiscent of classic R&B and Rock 'n' Roll but with a contemporary sensibility. The band combine soulful melodies, deep grooves, and fuzzed-out hooks to form a completely distinct sound."

Least favorite/most disappointing album?
Ryan: Metallica "Load". I was a huge fan at the time. I really wanted to like that record.
Octavio: Green Day "Nimrod".
Aaron: I've wiped it from memory whatever it was.

Favorite concert ever?
Ryan: The Flaming Lips at the Harmony Festival. Absolutely riveting.
Joey: AFI at Gilman St.
Octavio: Tom Petty and the Heartbreakers at Sac Valley Amphitheater.
Aaron: Queens of the Stone Age at the Warfield around 2007. Great band, great chandeliers.

Least favorite concert?
Ryan: Cat Power at The Fillmore. I'm a huge fan, but the show was not good. She just couldn't get it together.
Joey: Limp Bizkit.
Octavio: Smash Mouth.
Aaron: The band that opened for the above QOTSA show, can't even remember their name.  Fucking ream dream.

Any thoughts, experiences about Pittsburgh?
Ryan: I live in Alameda, CA which is the hometown of the great Pirates first baseman Willie Stargell. There is actually a street named after him a block from my house.
Joey: Been before, looking forward to being back.
Octavio: I wonder how good Primanti Brothers sandwich is…
Aaron: Never been, but I'm about to.

Thanks, fellas. Willie Stargell will always be the man around here, Ryan. I actually sang Karaoke once with his daughter, Kelli. Never know what can happen growing up in Pittsburgh.

FTC Disclosure: This post contains affiliate links. If you make a purchase after clicking on a link, I receive a small commission at no extra cost to you. The links helps to support this site and will allow me to keep writing about local music.
Posted by Hughshows at 11:22 AM